Ebony, a necromancer and a sanguine, has spent her life being distrusted for her blood magic. Even in the godless, magic-driven city of Jianyi, sanguineus isn’t welcome. However, she might finally have found a way to prove herself as the student of Brand, Master of the Guild of Necromancers – until she discovers he wants her as a human sacrifice, to summon a banished death god.

As Ebony seeks a way to stop him and protect the city’s other sanguines, she will come up against necromancers and demons, find allies in assassins and illusionists, and confront not just Brand, but the buried history of her own magic – and the power it could bring. 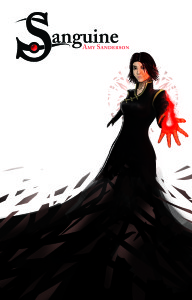 Sanguine is a stand-alone YA fantasy set in a city where magic is a commodity. It’s packed with necromancy and blood magic, assassins and illusionists, banished gods and demons, as well as a pair of female protagonists who really don’t let anything get in their way!

Sanguine is currently available at the following stores and subscription services, via the links below:

You can also add Sanguine to your GoodReads shelves.